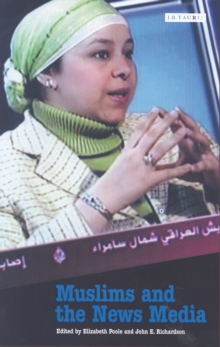 Muslims and the news media

Muslims have featured in many of the more significant news stories of the past few years - yet shockingly very few of these stories have been about anything other than the 'war on terror'.

This urgently relevant book examines the role and representations of Muslims in the news media particularly within a climate of threat, fear and misunderstanding.

Written by both academic authorities and media practitioners, Muslims and the News Media is designed as a comprehensive and critical textbook and is set in both the British and international context.

Bringing together a range of insightful perspectives on the subject into a coherent whole, the book clearly establishes the links between context, content, production and audiences, thus reflecting the entire cycle of the communication process.

Significant too and discussed here is the role of Muslims themselves in the processes of news production.

Impressively, it also attempts to answer fundamental questions about a multicultural Europe...Essential reading for every current affairs and news editor.'_x000D_Daphna Baram, author of Disenchantment: The Guardian and Israel_x000D_' Muslims and the News Media provides a much-needed, authoritative and wide-ranging set of interventions both documenting and challenging the democratic deficits, as well as analyzing new democratizing possibilities, that characterize today's news media.

This is a most timely and important work indeed.' _x000D_Professor Simon Cottle, Director, Media and Communications Program, University of Melbourne