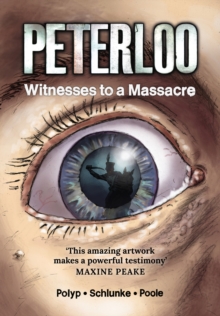 Peterloo : witnesses to a massacre

The explosive tale of Peterloo, told `verbatim' style through the voices of those who were there.

More than 15 people died and 600 were severely wounded by sabre-wielding troops at a peaceful pro-democracy rally.

This is a visual account of the 16 August, 1819 massacre, to be published as part of the 200th anniversary commemorations.

The entire narrative is drawn exclusively from the direct testimony of the time much of it newly unearthed by leading historian Professor Robert Poole, including letters, memoirs, journalist's accounts, spies' reports and courtroom evidence.

These have been carefully woven together into rich, vivid illustrations by professional cartoonist, illustrator and graphic novelist Polyp.

At a time when democracy is under siege the memory of Peterloo is all the more crucial, and challenges the reader to ask what we have done with the legacy passed on by those who died.