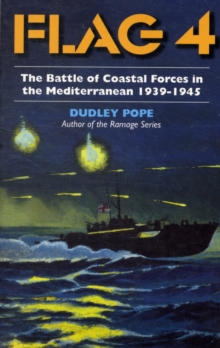 Flag 4 : the battle of coastal forces in the Mediterranean

Exciting account of actions in one of the most significant naval theatres of the War. Well-known and bestselling author of the Ramage series Affordable paperback format.

FLAG 4, the signal for 'Attack with torpedoes', is a thrilling account of the actions of British motor torpedo boats and US PT-boats in the Mediterranean during the Second World War. British Coastal Forces were the smallest fighting ships of the Royal Navy, able to fight in the shallowest waters, penetrate minefields and hide in the inlets of enemy-held islands - they were, in fact, from 1940 to 1943, the only surface craft continually able to seek out and attack the enemy.

Night assaults on enemy coastal convoys, clandestine operations landing spies, and Special Boat Squadron units in North Africa and Yugoslavia were typical of the operations in which they were involved.

Concentrating on the actions, tactics and strategy of Coastal Forces, the book also looks at the whole question of why both the Allies and Axis forces fought so hard for what were, in effect, large expanses of sand and water. Based on the eyewitness accounts of the officers and men who served in these perilous actions, the story of Coastal Forces in the Mediterranean is told with all the attention to detail and vivid writing style that came to typify Dudley Pope's Ramage novels. DUDLEY POPE served in the Second World War as a cadet in the Merchant Navy until wounded in the battle of the Atlantic.

After the War he worked on Fleet Street before turning to full-time writing.

He published a number of distinguished non-fiction books, notably the bestselling Life in Nelson's Navy and eighteen 'Ramage' novels.