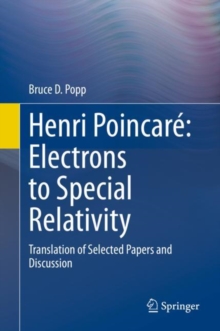 Produced by an award-winning translator of Henri Poincare, this book contains translations of several seminal articles by Poincare and discusses the experimental and theoretical investigations of electrons that form their context.

In the 1950s, a dispute ignited about the origin of the theory of special relativity and thrust considerable notoriety on a paper written by Henri Poincare in 1905.

Accordingly, Part I presents the relevant translations of Poincare's work showing that radiation carries momentum and the covariance of the equations of electrodynamics, the continuity equation for charge, and the spacetime interval.

Part II then discusses investigations by Thomson, Becquerel, and Kaufmann of electrons in diverse contexts; contributions of Abraham, Lorentz and Poincare to a theory of electrons that includes Lorentz transformations and explains the dependence of mass on velocity; and finally, Poincare's exploration of the relativity principle, electron stability, and gravitation while rejecting absolute motion (ether) and an electromagnetic origin of mass.

Part III contains the 1904 article by H. A. Lorentz presenting his transformations.This book will be a fascinating read to graduate-level students, physicists, and science historians who are interested in the development of electrodynamics and the classical, relativistic theory of electrons at the beginning of the 20th century.