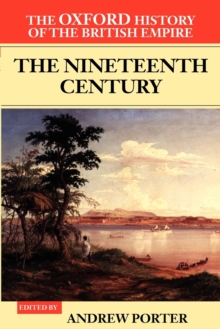 The Oxford history of the British EmpireVol. 3: The nineteenth century

Part of the The Oxford History of the British Empire series

Volume III of The Oxford History of the British Empire covers the long nineteenth century, from the achievement of American independence in the 1780s to the eve of world war in 1914.

This was the period of Britain's greatest expansion as both empire-builder and dominant world power.

The volume is divided into two parts. The first contains thematic chapters, some focusing on Britain, others on areas at the imperial periphery, exploring those fundamental dynamics of Britishexpansion which made imperial influence and rule possible.

They also examine the economic, cultural, and institutional frameworks which gave shape to Britain's overseas empire.Part 2 is devoted to the principal areas of imperial activity overseas, including both white settler and tropical colonies.

Themes dealt with include the economics of empire, imperial institutions, defence, technology, imperial and colonial cultures, science and exploration.

Attention is given not only to the formal empire, from Australasia and the WestIndies to India and the African colonies, but also to China and Latin America, often regarded as central components of a British 'informal empire'.Series BlurbThe Oxford History of the British Empire is a major new assessment of the Empire in the light of recent scholarship and the progressive opening of historical records.

From the founding of colonies in North America and the West Indies in the seventeenth century to the reversion of Hong Kong to China at the end of the twentieth, British imperialism was a catalyst for far-reaching change.