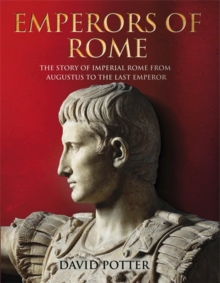 Emperors of Rome : the story of Imperial Rome from Julius Caesar to the last emperor

In 27 BC, after the tumultuous period of civil war that followed the assassination of Julius Caesar, Octavian was proclaimed emperor by the Roman Senate and given the title 'Augustus'.

He ruled over an Empire that embraced the territories of some 25 modern nation-states and had more than 50 million subjects.

Its provinces stretched from Hadrian's Wall in the North to Egypt in the South, and from Portugal in the West to Syria in the East. Emperors of Rome charts the 500 years that followed the death of Caesar and eventual triumph of Augustus, an era during which Rome reached heights of economic prosperity and cultural achievement, but also plumbed depths of anarchy, cruelty and chaos.

Professor David Potter brings to life the key events of this extraordinary period of history - from the Golden Age of Augustus to the destruction of Pompeii, from the reorganization of the Empire under Diocletian in 284 to the division of the Empire into Eastern and Western halves in 395, and from Constantine's Edict of Milan of 313 to the sack of Rome by the Visigoths in 410. In a series of elegant and memorable pen-portraits, David Potter profiles the greatest and most notorious of the emperors - the autocratic Augustus, the feeble Claudius, the vicious Nero, the beneficent Marcus Aurelius, the maniac Commodus.

But these colourful accounts of the Caesars are just part of a wider narrative that both illuminates and investigates the vicissitudes and ultimate decline of the Roman imperial polity.