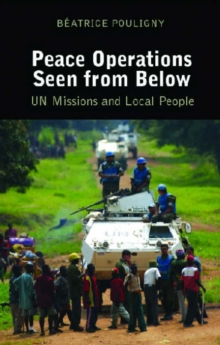 Peace Operations Seen from Below : U.N. Missions and Local People

Cambodia, Somalia, Mozambique, Bosnia, Haiti, Sierra Leone - all have been the subject of interventions by armed UN units sent to stabilise societies riven by political and ethnic antagonism.

Apart from anecdotal reportage, little is known or has been investigated about how local inhabitants in these and other cities interact with and respond to peacekeepers in their midst.

Most studies of post-conflict situations focus on political elites, the demobilisation of armed groups and the question of whether externally determined criteria for state reconstruction have been met.In "Peace Operations Seen From Below", Beatrice Pouligny argues that much of what is being rebuilt in societies emerging from war - or in some cases what is continuing to be destroyed - often lies in the 'ordinary' daily lives of both local populations and the staff of UN missions.

These on-the-ground realities are often overlooked by outsiders, yet they may prove to be as important as political negotiations at the 'centre', debates in the UN Security Council or hearings before an International Criminal Court.

Central to Pouligny's study is the key role played by local interlocutors. Her close analysis of several UN interventions, based on first hand observation of how local people intermingle with UN soldiery and civilians, sheds light on a neglected but crucial dimension of international peace enforcement.