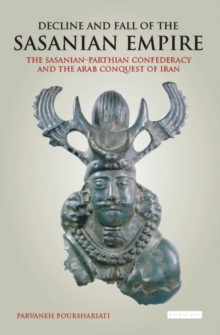 Decline and fall of the Sasanian empire : the Sasanian-Parthian confederact and the Arab conquest of Iran

I.B.Tauris in association with the Iran Heritage FoundationIt proposes a convincing contemporary answer answer to an ages-old mystery and conundrum: why, in the seventh century CE, did the seemingly powerful and secure Sasanian empire of Persia succumb so quickly and disastrously to the all-conquering Arab armies of Islam?

Offering an impressive appraisal of the Sasanians' nemesis at the hands of the Arab forces which scythed all before them, the author suggests a bold solution to the enigma.

On the face of it, the collapse of the Sasanians - given their strength and imperial power in the earlier part of the century - looks startling and inexplicable.

But Professor Pourshariati explains their fall in terms of an earlier corrosion and decline, and as a result of their own internal weaknesses.

The decentralised dynastic system of the Sasanian empire, whose backbone was a Sasanian-Parthian alliance, contained the seeds of its own destruction.

This confederacy soon became unstable, and its degeneration sealed the fate of a doomed dynasty.