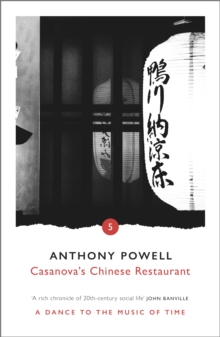 Part of the A dance to the music of time ; 5 series

This is the fifth novel in Anthony Powell's brilliant twelve-novel sequence, "A Dance to the Music of Time" which chronicles the lives of over 300 characters, and is a unique evocation of life in twentieth-century England.

It is unrivalled for its scope, its humour and the enormous pleasure it has given to generations. "Casanova's Chinese Restaurant" follows Nicholas Jenkins, Kenneth Widmerpool and others, as they negotiate the intellectual, cultural and social hurdles which stand between them and the 'Acceptance World'. 'I think it is now becoming clear that "A Dance to the Music of Time" is going to become the greatest modern novel since Ulysses' - Clive James. 'I would rather read Mr Powell than any English novelist now writing' - Kingsley Amis. 'Intensely enjoyable - his dry, ironic descriptions are very funny indeed.

A witty and shapely account of conventional English education' - "Observer". 'I find Powell the sort of writer who exerts such a strong pull that turning anyone else's books, after his, calls for an effort of will - one of the most individual tones of voice in contemporary novel-writing and one of the most artful' - Norman Shrapnel, "Guardian". Anthony Powell was born in 1905. After working in publishing and as a scriptwriter, he began to write for the "Daily Telegraph" in the mid-1930s.

He served in the army during World War II and subsequently became the fiction reviewer on the TLS.

Next came five years as literary editor of "Punch". He was appointed a Companion of Honour in 1988. In addition to the twelve-novel sequence, "A Dance to the Music of Time", Anthony Powell is the author of seven other novels, and four volumes of memoirs, "To Keep the Ball Rolling".