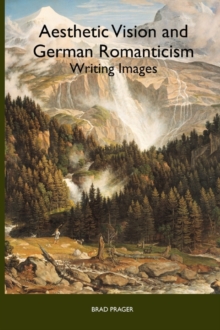 Part of the Studies in German Literature, Linguistics, and Culture series

The work of the groundbreaking writers and artists of German Romanticism -- including the writers Tieck, Brentano, and Eichendorff and the artists Caspar David Friedrich and Philipp Otto Runge -- followed from the philosophical arguments of the German Idealists, who placed emphasis on exploring the subjective space of the imagination.

The Romantic perspective was a form of engagement with Idealist discourses, especially Kant's Critique of Pure Reason and Fichte's Science of Knowledge.

Through an aggressive, speculative reading of Kant, the Romantics abandoned the binary distinction between the palpable outer world and the ungraspable space of the mind's eye and were therefore compelled to develop new terms for understanding the distinction between "internal" and "external." In this light, Brad Prager urges a reassessment of some of Romanticism's major oppositional tropes, contending that binaries such as "self and other," "symbol and allegory," and "light and dark," should be understood as alternatives to Lessing's distinction between interior and exterior worlds.

Prager thus crosses the boundaries between philosophy, literature, and art history to explore German Romantic writing about visual experience, examining the interplay of text and image in the formulation of Romantic epistemology. Brad Prager is Associate Professor of German at the University of Missouri, Columbia.