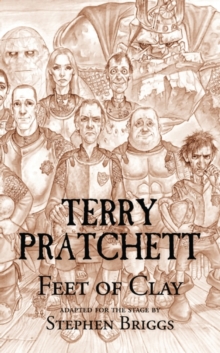 Someone is killing Lord Vetinari, Patrician of Ankh- Morpork.

No one knows who, no one knows why and, worst of all, no one knows how he just gets weaker and weaker. But its not just Vetinari across the city, people are being murdered, but theres no trace of anything alive having been at the crime scene.

Commander Vimes, Head of the City Watch, is a man who hates clues.

He and his team must question everyone the butcher, the baker, the candlestick maker.

In a city teeming with vampires, werewolves, dwarfs with attitude and golems, Vimes must solve the crimes and save the Patrician. As all children know, the way you get into a fantasy world is by accident...

You go into the wardrobe, looking for somewhere to hide and bingo. And thats how Stephen Briggs found Discworld. In 1990, he wrote to ask Terry if he could stage Wyrd Sisters.

That was the first time anyone, anywhere in the world, had dramatised Terrys work.

He had no idea it would go any further than one play (possibly two).

But it did. So far, he has now adapted, staged and published twenty-two plays. He and Terry also worked together to produce the original Discworld Maps and Diaries, Nanny Ogg's Cookbook, The Discworld Companion (now called Turtle Recall