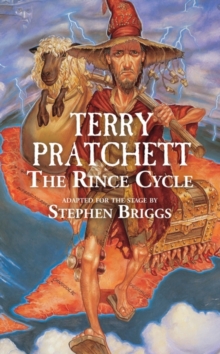 As a punishment, failed wizard Rincewind is given the task of guiding and safeguarding the Disc's first tourist, Twoflower (with his magical luggage on legs).

As they travel the city and beyond, they meet the world's oldest hero, Cohen the Barbarian.

With him, and with Bethan (a qualified sacrificial victim), they encounter druids, trolls, adventurers, a hairdresser and a power-crazed wizard.

Oh, and Death. But not fatally. Did we mention that Rincewind also has to save the world from destruction by a huge red star that will collide with the Discworld at Hogswatch? The Rince Cycle is mostly based on The Light Fantastic, with bits of The Colour of Magic and Sourcery added for good measure.

One of Terry Pratchett's most popular Discworld Novels adapted for the stage by long-time friend and collaborator Stephen Briggs.

The Rince Cycle mashes the best moments of Rincewind, one of Pratchett's most popular and enduring characters, into a two hour show