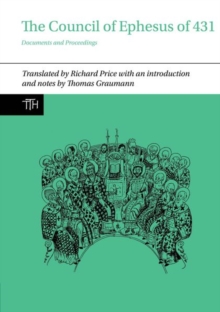 The Council of Ephesus of 431 : documents and proceedings

By: Price, Richard,  Graumann, Thomas(Introduction and notes by)

The First Council of Ephesus (431) was the climax of the so-called Nestorian Controversy.

Convoked by the emperor Theodosius II to restore peace to the Church, it immediately divided into two rival councils, both meeting at Ephesus.

Attempts by the emperor's representatives to get the bishops on both sides to meet together had no success, and after four months the council was dissolved without having ever properly met.

But a number of decrees by the larger of the two rival councils, in particular the condemnation of Nestorius of Constantinople, were subsequently accepted as the valid decrees of the 'ecumenical council of Ephesus'.

The documentation, consisting of conciliar proceedings, letters and other documents, provides information not only about events in Ephesus itself, but also about lobbying and public demonstrations in Constantinople.

There is no episode in late Roman history where we are so well informed about how politics were conducted in the imperial capital.

This makes the Acts a document of first importance for the history of the Later Roman Empire as well for that of the Church.