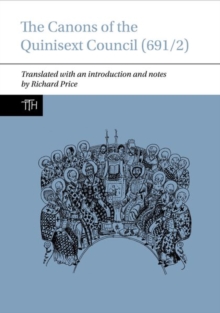 These canons (or rules) for church organization and life and Christianmorals issued at a council held in Constantinople in 691/2 form the foundationof Byzantine Canon Law.

They show an intense concern to restore the properdiscipline of clerical life after the chaos brought about by the Arabinvasions.

The rules for the laity show a concern to secure obedience to theChurch's rules about marriage, proper respect for sacred space, and the suppressionof customs of pagan origin.

Particular interest attaches to the canons that expressdisapproval of certain customs of the Western Church and of the ArmenianChurch.

Was this an attempt to impose Byzantine hegemony, or simply a revulsionat customs that seemed wrong?

The Byzantine emperor tried repeatedly to get thePope to give the new canons the stamp of his approval; his failure marks animportant stage in the mounting divergence between the Greek and the Roman Churches. The translation is accompanied by full annotation, while the introduction sets thecouncil in its historical context, in both the history of the early medievalworld and the development of Eastern Canon Law.