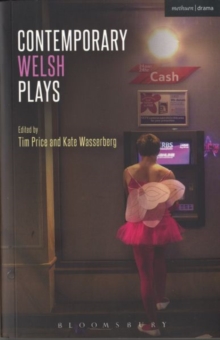 Recent years have seen an explosion of new Welsh writing for the stage.

With the advent of Theatr Genedlaethol Cymru in 2003 and the launch of National Theatre Wales in 2009, there has been a tectonic shift in Welsh theatre and its perception.

Wales has famously celebrated its poets and novelists, but in the twenty-first century, it is the playwright asking the crucial questions.

Never before have there been so many playwrights of all ages, from across Wales, finding the stage to be the home for their stories. This collection is the first to officially recognise this new wave of Welsh playwrights.

It showcases a wide range of forms, themes and political concerns, as well as representing the most exciting voices at the forefront of Welsh drama, taking the temperature on what be considered to be the first golden age of Welsh playwriting. Tonypandemonium by Rachel Trezise The Radicalisation of Bradley Manning by Tim PriceGardening for the Unfulfilled and Alienated by Brad BirchLlwyth by Dafydd James (published in Welsh) Parallel Lines by Katherine ChandlerBruised by Matthew TrevannionFeatured in the volume are the following plays, along with a foreword by Professor David Ian Rabey of Aberystwyth University, and an introduction by the editors, Tim Price and Kate Wasserberg.