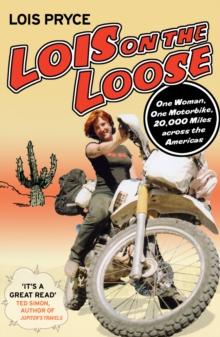 Lois on the loose

Young and beautiful, Lois Pryce was a rising star at the BBC.

Unbeknownst to her co-workers, Lois lived a parallel life as a biker babe with an overwhelming sense of wanderlust.

Alone. Armed only with the Spanish words for 'caution' and 'cheese', Lois was rather under-prepared for multiple bear sightings, bribing her way through borders, spending a night in a Mexican brothel and crashing her bike in the wilds of Patagonia.

She most certainly got the adventure she craved, and her pulse-pounding, soul-searching adventure has already attracted fans worldwide - a weblog that she kept whilst on her travels was receiving more than two-thousand hits a day.

Her hilarious, brilliantly written travelog will appeal to anyone who's ever dreamt of jacking-it-all-in and running away to see the world.