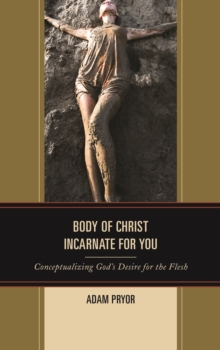 Body of christ incarnate for you : conceptualizing God's desire for the flesh

Part of the Studies in Body and Religion series

Incarnation has always been an important concept within Christian theology.

For centuries theologians have wrestled with how best to conceptualize the vexing problem of what it means that Jesus the Christ is fully God and fully human.

In this book, Adam Pryor explores how the incarnation has intersected corresponding issues well beyond the familiar question of how any one person might have two natures.

Beginning by identifying four critical themes that have historically shaped the development of this doctrine, Pryor goes on to offer a constructive account of the incarnation.

His account seeks out the continued meaning of this doctrine given the increasing complexity that characterizes our understanding of human bodies-bodies that can no longer be understood as the locus of distinct subjects separated from the world of objects with the skin as an impenetrable boundary between the two.

Incarnation, in guises as various as Jesus the Christ, cyborg bodies, and sacramental practices, becomes a way that God is diffused into the world, transforming how we are to be-with one another.