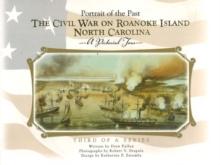 Even though the Civil War on Hatteras Island ended with the capture of Hatteras by Union forces, the Outer Banks role in the war did not end there.

Brigadier General Ambrose Burnside continued his expedition into Roanoake Island in 1862, along with flag officer L.

J. Goldsborough, Colonel Rush Hawkins of the Ninth New York Zouves, and many others, causing great upheaval and dissonance to the simple lives of the islanders.

As with Aerial Perspective's other books, the pictures can almost tell the story on their own, but the rich historical detail in the text is absolutely fascinating.

Following the tradition of using Edwin Graves Champney's sketches in Aerial Perspective's prior Civil War book, this book features drawings by his cousin, James Wells Champney, who was also stationed at Fort Macom in the Outer Banks with the Union forces.

In addition, journal entries and personal correspondence of soldiers such as Charles F.

Johnson and Capt. William Chase (of the 4th Rhode Island) and the development of freedom's colony allow the reader a truly personal look into the soldiers' lives during these trying times.