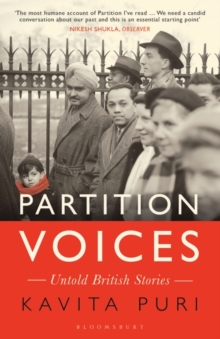 We need a candid conversation about our past and this is an essential starting point' Nikesh Shukla, Observer'The book of 2019 that opened my eyes more than anything else.

Seminal work, beautifully told' Emily Maitlis'Opens a fascinating and necessary conversation about contemporary Britain and its people - where they have come from, what they have done, and who they may now want to be' Times Literary SupplementThe division of the Indian subcontinent in 1947 into India and Pakistan saw millions uprooted and resulted in unspeakable violence.

It happened far away, but it would shape modern Britain. Dotted across homes in Britain are people who were witnesses to one of the most tumultuous events of the twentieth century.

But their memory of Partition has been shrouded in silence.

In her eye-opening and timely work, Kavita Puri uncovers remarkable testimonies from former subjects of the Raj who are now British citizens - including her father.

Weaving a tapestry of human experience over seven decades, Puri reveals a secret history of ruptured families and friendships, extraordinary journeys and daring rescue missions that reverberates with compassion and loss.

It is a work that breaks the silence and confronts the difficult truths at the heart of Britain's shared past with South Asia.