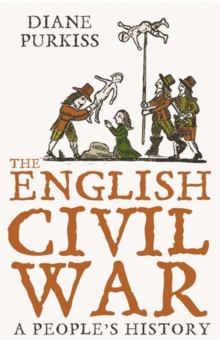 HarperPerennial
0007150628 / 9780007150625
Paperback
942'.062
05/02/2007
5 in stock Need More ?
United Kingdom
English
20 cm xxiii, 627 p., [24] p. of plates : ill.
general  Learn More
Reprint. Originally published: London: HarperPress, 2006.
/ Lead title / Includes PS Section A remarkable popular history of the English Civil War, from the perspectives of those involved in this most significant turning point in British history. / A fascinating and insightful account of one of history's most popular periods, based on the experiences and records of the ordinary men and women who survived the uphevel and tragedy. / 'The English Civil War' was widely reviewed and promoted -- the paperback edition will be backed by an additional marketing and publicity campaign.

This is a remarkable popular history of the English Civil War, from the perspectives of those involved in this most significant turning point in British history.

This compelling history, culminating in the execution of Charles I, brings to life the people who fought in it, died in it, and in doing so changed the history of the world forever.

In an excitingly fresh approach to the period, Diane Purkiss tells the story of this critical era not just in terms of the battle of ideas, but as the histories of the people who conceived them. "The English Civil War" builds a gripping narrative of the individuals involved and their motives, from those whose reputations were made on the back of this violent and brutal war, such as Oliver Cromwell and Lady Eleanor Davies, to witchfinders and revolutionaries; and ultimately, the ordinary men who fought and the women who lived with tragedy, finding their political voice for the first time.

The consequences of ten years of bloody revolution were to stretch from the cities to the villages to the grand houses, form Ulster to East Anglia to the outer reaches of Cornwall. The tales uncovered by Diane Purkiss paint a picture of a world turned upside down, where madness and prophesy play their part, and where normal life and times are suspended.

This important book uncovers forgotten lives and illustrates incisively the critical contribution of this extraordinary period in English history to contemporary politics and society.