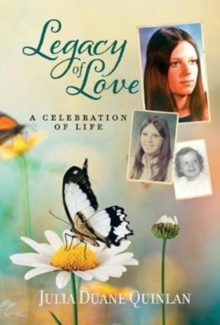 Legacy of Love : A Celebration of Life

The story of Karen Ann Quinlan and the battle her parents fought to allow her the right to die is one that is known worldwide.

Karen's story captured international headlines when, after slipping into a persistent vegetative state her doctors refused to remove her from a respirator, that at the time was thought to be keeping her alive.After a court battle to become legal guardians of their 21-year-old daughter the Quinlans won the right to remove their daughter from the respirator.

Karen survived ten years without the machine, but the legal battle for the Right to Die, Advance Directives and Hospital Ethics committees had been fought and won for all of us.

In this book, Julia Duane Quinlan writes about how Karen's life became a legacy of love.

She tells us how proceeds from the book, "Karen Ann - The Quinlans Tell Their Story," and a movie by the same title became the seed money to found the Karen Ann Quinlan Hospice in Northwestern New Jersey.

Quinlan tells us how the Hospice has grown to help hundreds of people in the community daily who are struggling with a life-limiting illness, die with dignity, pain- free, surrounded by those who love them.This book gives insight to some of the nurses, staff, volunteers and aides who help these people and their families through one of the most difficult times of their lives.It sheds a light on the good work that is done everyday that most people don't know about.

This book tells the story of how a simple vision to help those who need it most, regardless of ability to pay, came to fruition.