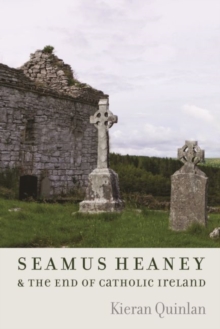 Seamus Heaney and the End of Catholic Ireland

Seamus Heaney & the End of Catholic Ireland takes off from the poet's growing awareness in the new millennium of "something far more important in my mental formation than cultural nationalism or the British presence or any of that stuff-namely, my early religious education." It then pursues an examination of the full trajectory of Heaney's religious beliefs as represented in his poetry, prose, and interviews, with a briefer account of the interactive religious histories of the Irish and international contexts in which he lived.

Thus, in the 1940s and 50s, Heaney was inducted into the narrow, punitive, but also enabling Catholicism of the era.

In the early 1960s he was witness to the lively religious debates from the Anglican Bishop of Woolwich's Honest to God to the seismic disruptions of Vatican II.

When the conflict in Northern Ireland between Catholics and Protestants broke out, Heaney was forced to dig deep for an imaginative understanding of its religious roots.

From the 1980s on, Heaney more and more proclaimed his own religious loss while also recognizing the institution's residual value in an Irish society of rising prosperity, weariness with the atrocities of a partly religion-inspired IRA, and beset by the scandals of sex abuse among the clergy.

Kieran Quinlan sees Heaney as an exemplar of this period of major change in Ireland as he engaged the religious issue not only in major writers such as James Joyce, W.

Breaking new ground by expanding the scope of Heaney's religious preoccupations and writing in an accessible, reflective, and sometimes provocative manner, Quinlan's study places Heaney in his universe, and that universe in turn in its wider intellectual setting.