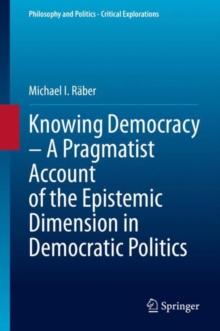 By: Raber, Michael I.

Part of the Philosophy and Politics - Critical Explorations series

How can we justify democracy's trust in the political judgments of ordinary people?

In Knowing Democracy, Michael Raber situates this question between two dominant alternative paradigms of thinking about the reflective qualities of democratic life: on the one hand, recent epistemic theories of democracy, which are based on the assumption that political participation promotes truth, and, on the other hand, theories of political judgment that are indebted to Hannah Arendt's aesthetic conception of political judgment.

The justification for democracy's trust in ordinary people's political judgments, Raber argues, resides in an egalitarian conception of democratic inquiry that blends the epistemic and the aesthetic aspects of the making of political judgments. By offering a rigorous scholarly analysis of the epistemic and aesthetic foundations of democracy from a pragmatist perspective, Knowing Democracy contributes to the current debates in political epistemology and aesthetics and politics, both of which ask about the appropriate reflective and experiential circumstances of democratic politics.