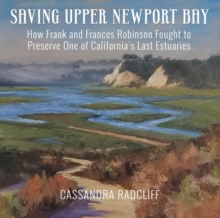 During Orange County's population boom in the early 1960s, the Robinson family moved to Newport Beach.

A short walk from their home was Upper Newport Bay, where they and their neighbors could play on North Star Beach, water ski on the bay's calm water, or dig in the shallow mudflats for fresh clams for dinner.

But land developers and local government officials had a different use for the open space in mindbuild a private harbor much like the bustling lower Newport Bay and Balboa Island.

In 1963, 14-year-old Jay Robinson rode his bike down to North Star Beach and found a newly erected "private property" sign.

His parents, Frank and Frances Robinson, would soon find themselves embroiled in one of the most important ecological battles in California, with friends, neighbors, newspapers, the government, and the courts all taking sides.

Saving Upper Newport Bay is the story of two ordinary people's life-changing journey, which ultimately impacted the history and ecology of southern California.

This book was produced on the 50th anniversary of The Newport Bay Conservancy, which focuses exclusively on the conservation and restoration of Upper Newport Bay.

Included are full color photos depicting the history of the bay.

RNK Conservation of the environment