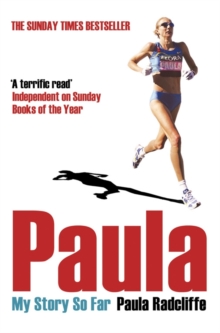 Paula : my story so far

Paula Radcliffe has managed to be both very successful in her field and incredibly popular with the Great British Public.

She was the underdog for so long -- narrowly missing out on medals in the 1999 World Championships and the 2000 Sydney Olympics -- that fans longed to see her win.

Paula's rosy manner hides a tough resolve to succeed and in 2002 her luck began to turn.

She won gold medals at both the Commonwealth and European championships and started to grab the headlines, bringing Britain's focus back to athletics.

Paula's bravery is not limited to the track, however.

She has become a passionate spokesperson against drug cheats and, inspired by her own battle with the condition, she is widely admired for her patronage of asthma charities. And even though Athens in 2004 proved to be more Greek tragedy than triumph, her popularity remains undimmed.

Her remarkable life story of highs and lows is fully chronicled in this fascinating and inspiring autobiography.