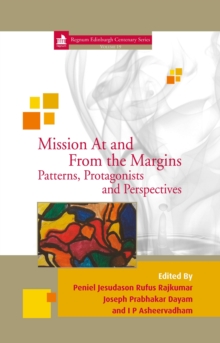 Mission At and From the Margins: Patterns, Protagonists and Perspectives - volume 19

Mission At and From the Margins: Patterns, Protagonists and Perspective revisits the 'hi-stories' of Mission from the 'bottom up' paying critical attention to people, perspectives and patterns that have often been elided in the construction of mission history.

Focusing on the mission story of Christian churches in the South Indian state of Andhra Pradesh, where Christianity is predominantly Dalit in its composition, this collection of essays, ushers its readers to re-shape their understanding of the landscape of mission history by drawing their attention to the silences and absences within pre-dominant historical accounts.

Contributors drawn from various Christian denominations explore not only the complex, contested and complicated interplay between caste, colonialism and Christianity in Andhra Pradesh but also the contemporary challenges for Christian mission at a wider level.

Not confining itself to the past history of Christian mission, the book engages critical issues as it analyses the missiological challenges of the present and offers theological imagination for the future of mission, which, while embracing the voices and visions of the margins, resists any and all forms of marginalization.