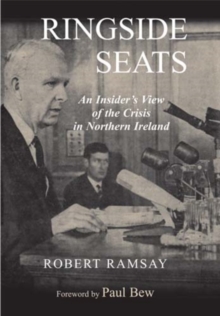 Ringside Seats : An Insider's View of the Crisis in Northern Ireland

This title provides an insider's first-hand account of many of the most turbulent moments in Northern Ireland's recent history.

The author rose to the rank of Deputy Secretary in the Northern Ireland Civil Service, having been Principal Private Secretary to the Prime Minister and experienced and recorded such events as the Civil Rights campaign; the rise of the provisional IRA; the fall of O'Neill; the Faulkner institutional initiatives; internment; and, Bloody Sunday, the introduction of Direct Rule, the last days of the old Stormont and Edward Heath's decision to prorogue the Northern Ireland Parliament.

An often personal account of events as they unfolded, the author also paints pen portraits of the principal personalities involved, their actions and motivations.

The personalities described are not only those in the political limelight, but also senior officials, whose behind-the-scenes influence has frequently made a significant impact on government policies and decisions.

The author also gives an informed commentary on the development of the overall situation, drawing on sources within the administrative machine and the security forces. The second half of Ramsay's career took him to the top of the administrative tree in Brussels and his account of that period traces the tortuous path from Common Market towards integration, via the stages of the constitutional treaties.

Uniquely, the author's role brings together the macro political world of the EU and the micro situation in Northern Ireland, in the preparation of the European Peace and Reconciliation Programmes of the 1990s.