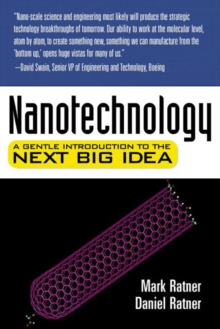 Nanotechnology : A Gentle Introduction to the Next Big Idea

This book is the technical and business overview of tomorrow's scientific breakthrough.

The authors survey the scientific research and business aspects of the field, try to explain the key concepts, provide a look at current developments, and give some thoughts on where nanotechnology is likely to go in the next few years.

The book will be approachable and witty, with lots of illustrations and examples.

The focus of the book is on science and technology, but business is discussed as well.

Ratner and Ratner go on to explain why the National Science Foundation has estimated that it could be a $1 trillion market by 2015.

Nanotechnology, or, as it is sometimes called, molecular manufacturing, is a branch of engineering that deals with the design and manufacture of extremely small electronic circuits and mechanical devices built at the molecular level of matter.

Nanotechnology holds promise in the quest for ever-more-powerful computers and communications devices.

But the most fascinating applications are in medical science.

Nanorobots might serve as programmable antibodies. As disease-causing bacteria and viruses mutate in their endless attempts to get around medical treatments, nanorobots could be reprogrammed to selectively seek out and destroy them.

Other nanorobots might be programmed to single out and kill cancer cells.