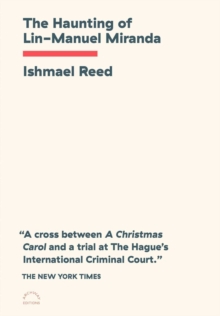 The Haunting Of Lin-manuel Miranda

Described by the New York Times as ';classic activist theater' and ';a cross between ';A Christmas Carol' and a trial at The Hague's International Criminal Court.'

In this his latest work, the protean Ishmael Reed--the legendary artist and prolific writer--continues to burnish his already sterling reputation by dismantling the Creation Myth of the founding of the U.S., as represented in the incredibly profitable play and musical, Hamilton. Reed, a verbal acrobat of global renown, demonstrates here why he is widely considered to be the leading intellectual in the U.S. today.

-Gerald Horne, author of The Counter-Revolution of 1776: Slave Resistance and the Origins of the USA

This powerful play, originally produced at the Nuyorican Poets Cafe, comprehensively dismantles the phenomenon of Lin-Manuel Miranda and Hamilton. Reed uses the musical's crimes against history to insist on a radical, cleareyed way of looking at our past and our selves. Both durable and timely, this goes beyond mere corrective it is a meticulously researched rebuttal, an absorbing drama, and brilliant rallying cry for justice.

The perfect tie-in to both the success of and backlash to Hamilton, it will be the major voice in contrast to the upcoming movie. It captures both the earnest engagement that fans of the musical desire, as well as the exhausted disbelief of those who can't stand it. Teachers, students and fans of drama, literature, and history will find much to love. It is written by one of America's most respected and original writers, who is eagerly promoting it, and who is long overdue for a renaissance.