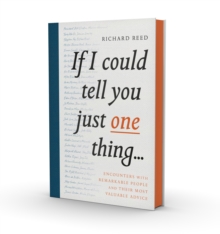 If I could tell you just one thing.. : encounters with remarkable people and their most valuable advice

By: Reed, Richard,  Kerr, Samuel(Illustrated by)

Each of the encounters is complemented by a pen and ink portrait by the award-winning British artist, Samuel Kerr.

The resulting book is a treasure trove for readers of all ages and interests and a perfect gift book for just about anyone.