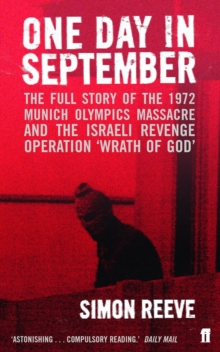 One Day in September

In the early hours of 5 September 1972 the perimeter fence surrounding the Olympic Village in Munich was scaled by terrorists.

Their target was the temporary home of the Israeli Olympic team, and within 24 hours seventeen men were dead: eleven Israelis, five terrorists and a German policeman. The attack by Black September, an ultra-violent faction of the Palestine Liberation Organisation, was seen on television by more than 900 million viewers.

The world watched as Jews suffered again on German soil.

Yet despite the immediate attention given to the disaster crucial questions went unanswered.

Why did so many die? Any why have the German officials covered up details of the massacre?Based largely on exhaustive investigations for the film One Day in September, this book is the definitive account of the tragedy.

With the help of previously secret documents, photographs and dozens of interviews, it reconstructs the tension of the day - and exposes the full extent of the Israeli 'Wrath of God' revenge mission, which over the next twenty years saw Israeli agents systematically murder their way across Europe and the Middle East. One Day in September is the most compelling account yet written of events in Munich, of the devastating impact the attack had on the relatives of terrorists and athletes alike - and of the long shadow the massacre still casts over the modern world.