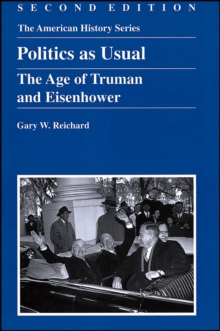 Politics as usual : the age of Truman and Eisenhower

Part of the The American history series series

Like its predecessor, this edition treats their decade after World War 2 as a discrete historical era, the end of which represents a watershed in the political life of the nation.

Despite the pressures created by the cold war and the challenges posed by developing nations, American politics from 1945 to 1960 reflects a relatively stable equilibrium.

Although from different political parties, Truman and Eisenhower shared a basic caution in fiscal affairs and an acceptance of the global responsibilities thrust on the US after the war.

Meanwhile, Democrats and Republicans continued to contest elections along the familiar fault lines formed during the New Deal, and the American electorate divided its loyalties relatively evenly between the two major parties.

Since 1988 when the first edition appeared, much as happened to affect our perspective on American political life during these years.

Of greatest importance, the end of the Cold War and the subsequent opening of significant new sources from 'the other side' allow us to see through a different prism the decisions and stances taken by US presidents and policymakers. In addition to considering the new historical literature, the author gives more attention to the challenges posed by the founding of Israel, the rise of Arab nationalism, the Korean War, the early stages of US involvement in Vietnam, and CIA operations.