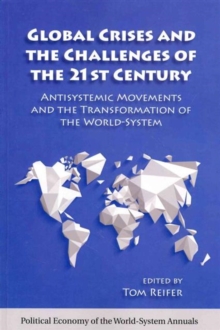 Global Crises and the Challenges of the 21st Century

Part of the Political Economy of the World-System Annuals series

Despite prognostications of the "end of history," the 21st century has posed new challenges and a host of global crises.

This book takes up the current global economic crisis in relation to new and changing dynamics of territory, authority, and rights in today's global system.

They discuss indigenous struggles against environmental land grabs and related destruction of indigenous lands by the US nuclear weapons complex.

The book uniquely considers the sacred in the context of the global system, including struggles of Latina/o farm workers in the U.S. for social justice and for change in the Catholic Church.

Other chapters examine questions of civilizations and identity in the contemporary global system, as well as the role of world-regions.