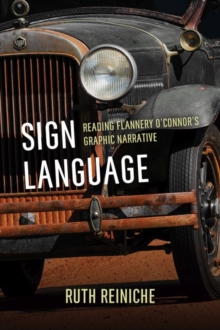 Flannery O'Connor is unique in that she is not only familiar with seventeenth-century emblematic representations of scriptural truth, but she is also knowledgeable of the conventions of twentieth-century art forms.

Her characters are illuminated by textual images formulated from the juxtaposition of scripture, seventeenth- and twentieth-century archetypes, and street detritus that inhabits pictorial sequences exceeding the boundaries of time and diachronically upending O'Connor's narrative world.

O'Connor's undergraduate single panel cartoons are an excellent starting point when tracing the chronological development of her stylized graphic narrative.

The sardonic captions are illustrated by characters who are compositions of deeply gouged lines and dots.

In her first novel, Wise Blood, some of the cartoonish grotesques remain, but the conventions of painting prevail in the novel.

Her characters are momentarily frozen in still life tableaux vivants or in montages, resulting in jarring juxtapositions.

In The Violent Bear it Away, O'Connor recreates ""snapshot"" moments, not unlike those inexpertly captured by the twentieth-century amateur photographer with a Brownie box camera.

Every photograph taken at this time was accompanied by its negative.

Reading the inverted negative and positive space, in the novel, reveals a palimpsestic Divine world coexisting alongside the world as we know it.

The idea of tattooing graphic text on the human body first occurs in the manuscript of Why do the Heathen Rage? and then in O'Connor's last story, Parker's Back. Flannery O'Connor's graphic narrative, a sign language of dots and lines, discarded objects, and the mutilation of human bodies, provides a stark illuminated manuscript for her readers.