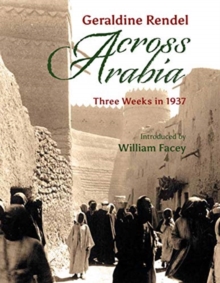 By: RENDEL, GERALDINE,  Facey, William(Introduction by)

At the end of March 1937, Geraldine Rendel found she had achieved a trio of unintended distinctions.

As the first Western woman to travel openly across Saudi Arabia as a non-Muslim, the first to be received in public by King 'Abd al-'Aziz, and the first to be received at dinner in the royal palace in Riyadh, she had joined a tiny coterie of pioneering British woman travelers in Arabia. Until the 1930s, a journey by any foreigner, male or female, across Arabia was a rare event.

But when in 1932 the Kingdom of Saudi Arabia was proclaimed, increasing numbers of diplomats and oil company representatives began to make their way to its remote desert capital, Riyadh, aided by the arrival of the motorcar.

With the car came the camera, and the pictures by the Rendels, both of them keen photographers, rank among the finest from the period. Geraldine's husband George, head of the Eastern Department of the Foreign Office, had been responsible for Britain's relations with Saudi Arabia since 1930.

When he and his wife were invited to the Kingdom by King 'Abd al-'Aziz for a visit combining diplomacy with travel, he accepted with alacrity.

The couple kept a detailed diary, on which Geraldine drew to write a lively account that she intended for publication.

In contrast to her husband, who had serious political business to conduct, she treats their journey as a holiday.

In the event her narrative, full of vivid social encounters, humor and insights into the women's side of life, failed to appear in print, and is published here for the first time. Combined with the couple's striking images, this book presents a unique picture of Saudi Arabia on the verge of modernization. William Facey's biographical introduction interweaves the story of Geraldine's adventurous life with the evolution of Anglo-Saudi relations in the 1920s and '30s, so placing the Rendels' trans-Arabian journey in its political context.