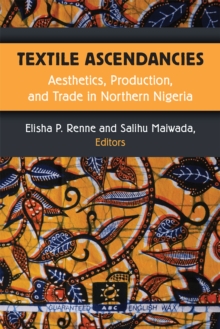 Part of the African Perspectives series

Until this century, Northern Nigeria was a major center of textile production and trade.

The book also suggests the conundrum considered by George Orwell concerning the benefits and disadvantages of "mechanical progress," and digital progress, for human existence.

While textile mill workers in northern Nigeria were proud to participate in the mechanization of weaving, the "tendency for the mechanization of the world" represented by more efficient looms and printing equipment in China has contributed to the closing of Nigerian mills and unemployment. Textile Ascendancies will appeal toanthropologists for its analyses of social identity as well as how the ethnic identity of consumers influences continued handwoven textile production.

The consideration of aesthetics and fashionable dress will appeal to specialists in textiles and clothing.

It will be useful to economic historians for the comparative analysis of textile manufacturing decline in the 21st century.

It will also be of interest to those thinking about global futures, about digitalization, and how new ways of making cloth and clothing may provide both employment and environmentally sound production practices.