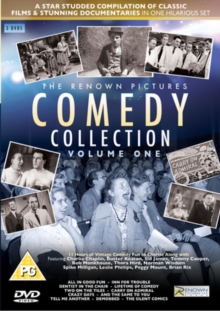 Collection of ten British comedy films. In 'All in Good Fun' (1955) Bob Monkhouse presents a selection of comedy clips from cinema's early history. 'Inn for Trouble' (1960) follows Ada and Alf Larkin (Peggy Mount and David Kossoff) as they take over the country pub 'The Earl of Osbourne'.

They soon discover the inn is in trouble due to the local Earl's tradition of handing out free beer so they try out a variety of ways to improve business.

In 'Dentist in the Chair' (1960) two dental students find themselves involved in the criminal activities of a thief when he tries to sell them stolen equipment. 'Two On the Tiles' (1951) follows a married couple as they separate in Paris where they are both tempted by members of the opposite sex.

In 'And the Same to You' (1960) Brian Rix plays Dickie Dreadnought, the boxing-mad nephew of pious clergyman Reverend Sydney Mullet (Leo Franklyn).

To mollify his disapproving uncle, Dickie embarks on an elaborate plan to keep his budding boxing career a secret, and he and his tough-talking promoter Wally Burton (William Hartnell) both pretend to be devout clergymen.

In 'Carry On Admiral' (1957) two friends are involved in a case of mistaken identity with disastrous results. 'Crazy Days' (1962) features a compilation of comedy moments from British and American silent films. 'Demobbed' (1944) follows a group of ex-soldiers as they try to get new jobs after being discharged from the army. 'Lifetime of Comedy' (1960) features a collection of classic comedy film sketches as does 'Tell Me Another' (1976), hosted by Richard Hills.