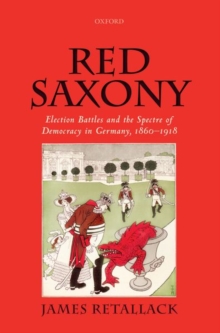 Red Saxony : Election battles and the Spectre of Democracy in Germany, 1860-1918

Red Saxony throws new light on the reciprocal relationship between political modernization and authoritarianism in Germany over the span of six decades. Election battles were fought so fiercely in Imperial Germany because they reflected two kinds of democratization.

Frightened by the electoral success of the Social Democrats after 1871, anti-democrats deployed many strategies that flew in the face of electoral fairness.

They battled socialists, liberals, and Jews at election time, but they also strove to rewrite theelectoral rules of the game.

Using a regional lens to rethink older assumptions about Germany's changing political culture, this volume focuses as much on contemporary Germans' perceptions of electoral fairness as on their experiences of voting.

It devotes special attention to various semi-democraticvoting systems whereby a general and equal suffrage (for the Reichstag) was combined with limited and unequal ones for local and regional parliaments.

For the first time, democratization at all three tiers of governance and their reciprocal effects are considered together.

Although the bourgeois face of German authoritarianism was nowhere more evident than in the Kingdom of Saxony, Red Saxony illustrates how other Germans grew to fear the spectre of democracy.

Certainly twists and turns layahead, yet that fear made it easier for Hitler and the Nazis to win elections in the 1920s and to entomb German democracy in 1933.