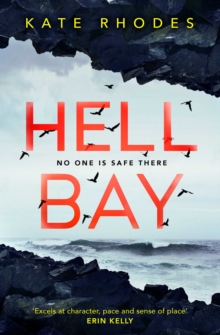 The first instalment in a gripping and atmospheric crime series set on a small island where there is no escape . . . 'Gripping, clever and impossible to put down' ERIN KELLYDI Ben Kitto needs a second chance.

After ten years working for the murder squad in London, a traumatic event has left him grief-stricken.

He's tried to resign from his job, but his boss has persuaded him to take three months to reconsider. Ben plans to work in his uncle's boatyard on the tiny Scilly island of Bryher where he was born, hoping to mend his shattered nerves.

His plans go awry when the body of a sixteen-year-old girl is found on the beach at Hell Bay.

Her attacker must still be on the island because no ferries have sailed during the two-day storm.

Everyone on the island is under suspicion. Dark secrets are about to resurface. And the murderer could strike again at any time . . . PRAISE FOR KATE RHODES: 'Gripping, clever and impossible to put down.

I've been a Kate Rhodes fan for years and in Ben Kitto she has created a detective who is just as complex and compelling as Kate's elegant plotting and stunning prose.

The claustrophobia and paranoia of the island are so brilliant evoked, I could almost feel the tide encroaching as time ran out to find the killer' ERIN KELLY 'Absorbing and complex, Hell Bay kept me guessing until the final pages' RACHEL ABBOTT 'A vividly realised protagonist whose complex and harrowing history rivals the central crime storyline' SOPHIE HANNAH 'Beautifully written and expertly plotted; this is a masterclass' GUARDIAN 'Expertly weaves a sense of place and character into a tense and intriguing story' METRO 'Rhodes does a superb job of balancing a portrayal of a tiny community oppressed by secrets with an uplifting evocation of setting' Jake Kerridge, SUNDAY EXPRESS 'The whole book tingles with tension.

I hope it does for the Scilly Isles what Ann Cleeves did for Shetland' MEL MCGRATH 'I love reading Kate's books in the way I love reading Sophie Hannah - a poet writing crime fiction is a great thing . . . It is at once a locked-room mystery, a story of the returning hero, and an examination of fear and abuse.