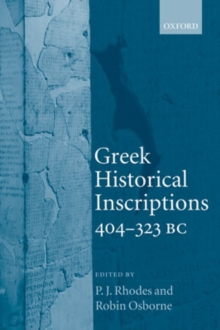 This volume is a successor to the second volume of M.

It provides an up-to-date selection - with introduction, Greek texts, English translations, and commentaries which cater for the needs of today's students - of inscriptions which are important for the study of Greek history in the fourth century BC.

The texts chosen illuminate not only the mainstream of Greek political and military history, but also institutional, social, economic, and religious life.

To emphasize the importance of inscriptions as physical objects, a number of photographs have been included.