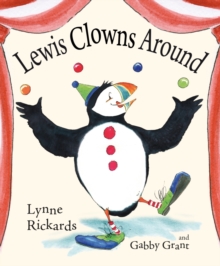 By: Rickards, Lynne,  Grant, Gabby(Illustrated by)

Part of the Picture Kelpies series

Poor Lewis hates being a puffin. His brother Harris is great at catching fish, flying and doing puffin things, but Lewis just doesn't fit in.

He longs for a different life, far away from the crashing waves and tall cliffs of the Firth of Forth.

But what else can a puffin do?Then, 'Eureka!' Lewis finds the answer, and heads off to the circus to become a clown.

But when his act goes terribly wrong, can Lewis overcome his fears, find some confidence and save the day?A charming and hilarious rhyming picture book about a young misfit puffin who learns that it's okay to be different.

The story is brought to life with colourful, characterful illustrations by Gabby Grant.