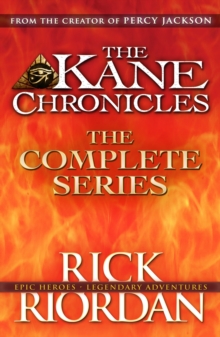 Part of the The Kane chronicles series

Don't miss any of the explosive action in the thrilling Kane Chronicles Trilogy, collected in one digital edition for the first time.

The Kane Chronicles: The Complete Series includes all three novels in the bestselling, electrifying adventure series: The Red Pyramid, The Throne of Fire, and The Serpent's Shadow. 'I guess it started the night our dad blew up The British Museum...' Carter and Sadie's dad is a brilliant Egyptologist with a secret plan that goes horribly wrong.

They must embark on a terrifying quest from Cairo and Paris to the American South-west, and discover their family's connection to the House of Life.

The pharaohs of Ancient Egypt are far from dead and buried. And so, unfortunately, are their gods . . . Rick Riordan has now sold an incredible 55 million copies of his books worldwide With all the action, humour and excitement you'd expect from Rick Riordan, author of the bestselling Percy Jackson series.

Rick Riordan is an award-winning writer. Percy Jackson and the Lightning Thief was the overall winner of the Red House Children's Book Award in 2006, and made into a blockbuster film in 2010.

The series has gone on to become a chart-topping success.