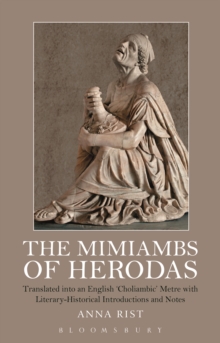 The third-century BC Greek poet Herodas had been all but forgotten until a papyrus of eight of his Mimiambs (plus fragments) turned up in the Egyptian desert at the end of the 19th century.

They have since been translated into various modern languages and supplied with scholarly commentaries.

This book is the first to attempt to reproduce in English Herodas' 'choliambic' or 'limping' metre (sic) - distinctive for its signatory reversed final foot, a variant on the standard Greek iambic trimeter. The present volume provides an accessible introduction to Herodas and his Mimiambs requiring no knowledge of Greek.

The translation steers a judicious course between literal accuracy and fidelity to this linguistically very demanding poet's spirit and intention.

The contextual introductions and notes on the poems take into account the most recent scholarship, providing explanation of the context of the Mimiambs and guiding the reader to an appreciation of the poetry itself.

The General Introduction places the author in his cultural world and context, namely urban society in the Ptolemaic Empire of the hellenistic period.

This he conjures up in his Mimiambs with an often scathing vividness.