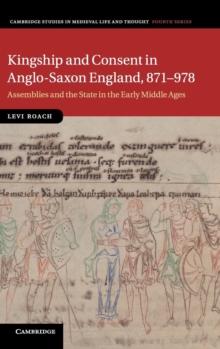 Kingship and consent in Anglo-Saxon England, 871-978 : assemblies and the state in the early middle ages

By: Roach, Levi (University of Exeter)

Part of the Cambridge Studies in Medieval Life and Thought: Fourth Series series

This engaging study focuses on the role of assemblies in later Anglo-Saxon politics, challenging and nuancing existing models of the late Anglo-Saxon state.

Its ten chapters investigate both traditional constitutional aspects of assemblies - who attended these events, where and when they met, and what business they conducted - and the symbolic and representational nature of these gatherings.

Levi Roach takes into account important recent work on continental rulership, and argues that assemblies were not a check on kingship in these years, but rather an essential feature of it.

In particular, the author highlights the role of symbolic communication at assemblies, arguing that ritual and demonstration were as important in English politics as they were elsewhere in Europe.

Far from being exceptional, the methods of rulership employed by English kings look very much like those witnessed elsewhere on the continent, where assemblies and ritual formed an essential part of the political order.