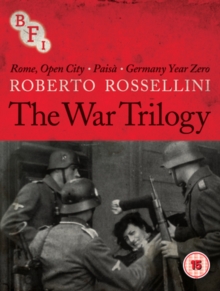 Resistance leader Giorgio Manfredi (Marcello Pagliero) flees the Gestapo and seeks a place to hide with the help of his friend Francesco (Francesco Grandjacquet), his pregnant fiancée Pina (Anna Magnani) and the priest who is due to marry them, Don Pietro Pellegrini (Aldo Fabrizi).

Giorgio's ex-girlfriend Marina (Maria Michi) betrays him and his fellow fighters to the Gestapo in order to get her hands on some luxury items and it's not long before the Nazis and the local police find him and Don Pietro.

They are captured and tortured but will they crack under the pain or be executed for their silence? 'Paisà' (1946) is Rossellini's account of the liberation of Italy during World War II, told in six chapters.

In each chapter a different view of the liberation is given as it spreads across the country.

Different characters are also followed in each segment including American chaplains, soldiers, monks and prostitutes.

Finally, 'Germany Year Zero' (1948) is Roberto Rossellini's moving account of life in post-war Germany telling the story of a 13-year old black marketeer who poisons his ailing father out of pity and necessity.