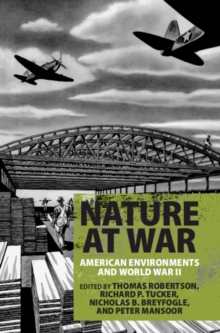 This anthology is the first sustained examination of American involvement in World War II through an environmental lens.

World War II was a total and global war that involved the extraction, processing, and use of vast quantities of natural resources.

The wartime military-industrial complex, the 'Arsenal of Democracy,' experienced tremendous economic growth and technological development, employing resources at a higher intensity than ever before.

The war years witnessed transformations in American agriculture; the proliferation of militarized landscapes; the popularization of chemical and pharmaceutical products; a rapid increase in energy consumption and the development of nuclear energy; a remaking of the nation's transportation networks; a shift in population toward the Sunbelt and the West Coast; a vast expansion in the federal government, in conjunction with industrial firms; and the emergence of environmentalism.

World War II represented a quantitative and qualitative leap in resource use, with lasting implications for American government, science, society, health, and ecology.