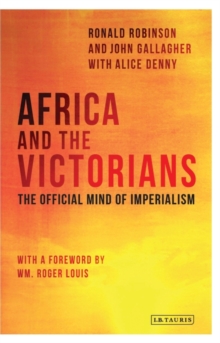 Africa and the Victorians : the official mind of imperialism

By: Louis, Wm Roger (University of Texas at Austin, USA)(Foreword by),  Denny, Alice(Edited by),  Gallagher, John(Edited by),  Robinson, Ronald(Edited by)

Imperialism in the eyes of the world is still Europe's original sin, even though the empires themselves have long since disappeared.

Among the most egregious of imperial acts was Victorian Britain's seemingly random partition of Africa.

In this classic work of history, a standard text for generations of students and historians now again available, the authors provide a unique account of the motives that went into the continent's partition.

Distrusting mechanistic explanations in terms of economic growth or the European balance, the authors consider the intentions in the minds of the partitioners themselves.

Decision by decision, the reasoning of Prime Ministers Gladstone, Salisbury and Rosebery, their advisors and opponents, is carefully analysed.

The result is a history of 'imperialism in the making', not as it appeared to later commentators and historians, but as the empire-makers themselves experienced it from day to day.

Featuring a new Foreword by Wm. Roger Louis, this new edition brings a classic work to a new generation and is essential reading for all students of nineteenth-century history.