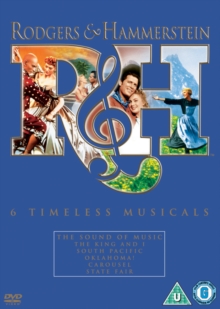 Box set containing six popular musicals from Rodgers and Hammerstein. 'Carousel' (1956) tells the story of carnival barker Billy Bigelow (Gordon MacRae), who is killed committing an armed robbery in order to provide for his baby girl.

Years later Billy is allowed to return to Earth for his daughter's graduation.

Songs included are 'If I Love You', 'Soliloquy', and 'You'll Never Walk Alone'.

In 'State Fair' (1945), every member of the Frake family is after a prize at the annual State Fair: father for his prize pig; mother for her pies in the pie contest; and for the son and daughter, true love.

Rodgers and Hammerstein's score was written especially for the screen and features some of their biggest hits, including 'It Might As Well Be Spring' and 'It's a Grand Night for Singing'.

The path to true love is thwarted, however, by nasty farmhand Jud Fry (Rod Steiger).

Featuring classics such as 'Oh, What a Beautiful Mornin' and 'People Will Say We're in Love'.

In 'South Pacific' (1958) an American Navy nurse (Mitzi Gaynor) stationed on a South Pacific Island falls in love with a middle-aged French planter (Rossano Brazzi), who goes on to become a war hero.

Includes the songs: 'There is Nothing Like a Dame', 'Bali Ha'i', 'Happy Talk' and 'I'm Gonna Wash That Man Right Outa My Hair'.

In 'The King and I' (1956), when nineteenth century English schoolteacher Anna Leonowens (Deborah Kerr) is employed by the King of Siam (Yul Brynner) to educate his many children, she takes her son, Louis (Rex Thompson), along with her.

Anna, a strong-willed woman, soon clashes with the king, who is used to having his every wish adhered to without question.

However, Anna's refusal to bow to his will wins his respect and, eventually, his love.

Rodgers and Hammerstein numbers include 'Hello Young Lovers' and 'Getting To Know You'.

Ex-nun Maria (Julie Andrews) becomes the governess for a family of seven children who live in the shadow of their domineering and repressed widower father (Christopher Plummer).

She brings love, music and excitement into the children's lives and also eventually begins to have an effect on their father.

But just when things are looking up, the rise of Nazism and the threat of the coming war darkens all their futures.

Includes a host of memorable songs, such as 'Do-Re-Mi', 'Climb Ev'ry Mountain', and 'My Favourite Things'.