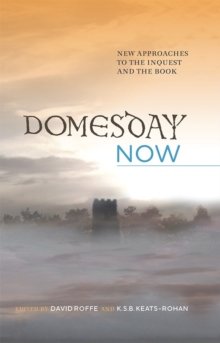 Domesday now : new approaches to the inquest and the book

Compiled from the records of a survey of the kingdom of England commissioned by William the Conqueror in 1085, Domesday Book is a key source for the history of England.

However, there has never been a critical edition of the text and so, despite over 200 years of intense academic study, its evidence has rarely been exploited to the full.

The essays in this volume seek to realize the potential of Domesday Book by focussing on the manuscript itself.

There are analyses of abbreviations, letter forms, and language; re-assessments of key sources, the role of tenants-in-chief in producing them, and the nature of the Norman settlement that their forms illuminate; a re-evaluation of the data and its referents; and finally, fresh examinations of the afterlife of the Domesday text and how it was subsequently perceived. In identifying new categories of evidence and revisiting old ones, these studies point to a better understanding of the text.

There are surprising insights into its sources and developing programme and, intriguingly, a system of encoding hitherto unsuspected.

In its turn the import of its data becomes clearer, thereby shedding new light on Anglo-Norman society and governance.

It is in these terms that this volume offers a departure in Domesday studies and looks forward to the resolution of long-standing problems that have hitherto bedevilled the interpretation of an iconic text. David Roffe and K.S.B. Keats-Rohan are leading Domesday scholars who have published widely on Domesday Book and related matters. Contributors: Howard B. Clarke, Sally Harvey, K.S.B. Keats-Rohan, Andrew Lowerre, John Palmer, David Roffe, Ian Taylor, Pamela Taylor, Frank Thorn, Ann Williams.