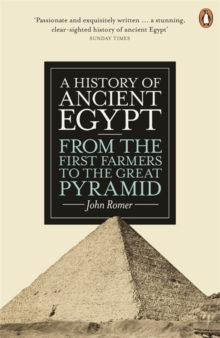 A history of ancient Egypt : from the first farmers to the Great Pyramid

The extraordinary history of Ancient Egyptian civilization - from its earliest origins to the creation of its greatest monument - from specialist John RomerThis exceptional book draws on a lifetime of research and thought to recreate the previously untold story of how a civilization which began with handfuls of semi-itinerant fishermen settled, spread and created a rich, vivid, strange civilization that had its first culmination in the pharaoh Khufu building the Great Pyramid. The book immerses the reader in the fascinating world of archaeological evidence, the process by which this long vanished world has gradually re-emerged and the rapidly changing interpretations which these breathtaking but entirely enigmatic remains have been subjected to.

Whether he is writing about the smallest necklace bead or the most elaborate royal tomb, John Romer conveys to the reader a remarkable sense of how to understand a people so like ourselves and yet in so many ways eerily different. Reviews:'Scholarly, passionate and exquisitely written ... a stunning, clear-sighted history of Ancient Egypt' James McConnachie, Sunday Times'It is not easy to enliven prehistory while simultaneously respecting limited archaeological evidence and avoiding novelistic pitfalls.

But Romer manages it ... After a long wait, we have an up-to-date, stimulating account of the birth of what may turn out to be the world's oldest civilization' Andrew Robinson, Nature'His physical descriptions are superb ... a book to be read and thought about' John Ray, Financial Times'Romer carries the reader along effortlessly on a lengthy, complex yet immensely satisfying journey' Joyce Tyldesley, BBC HistoryAbout the author:John Romer has been working in Egypt since 1966 on archaeological digs in many key sites, including the Valley of the Kings and Karnak.

He led the Brooklyn Museum expedition to excavate the tomb of Ramesses XI. He wrote and presented a number of television series, including The Seven Wonders of the World, Romer's Egypt, Ancient Lives and Testament.

His major books include The Great Pyramid: Ancient Egypt Revisited and Valley of the Kings.

He lives in Italy.